When we take all male data points and perform a regression analysis, we see with 95% confidence that for every 1% increase in the men’s hydration level, their mean time decreased by .2662 hours (16 minutes). With this information, we are able to predict with 95% confidence the male mean finish time based on hydration.

Likewise, when we take all female data points, we see with 95% confidence that for every 1% increase in hydration level, female’s mean time decreased by .2036 hours (12 minutes).

DETAILS ABOUT THE STUDY

Over the three years of the Tanita Ironman Study, 4,426 male participants and 1,314 female participants were tested. See the details of the study and download the report at the end of this article. 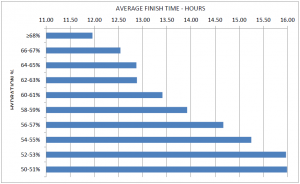 The male hydration levels and the average corresponding finish times in hours.

The average hydration level of men who were able to finish the triathlon was 60%.

The average hydration level of women who finished the triathlon was 55.7%. 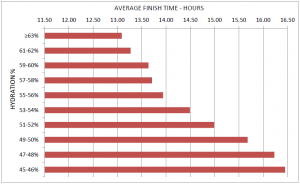 The Female hydration levels and the average corresponding finish times in hours.

45/68 (66%) of the female participants with a pre‐competition hydration level <50% were able to finish the race, those who finished had an average time of 15.22 hours.

For years, coaches, trainers and athletes alike have recognized the importance of hydration “before, during and after” athletic competitions.

HYDRATION is essential in cooling the body through sweat and helps prevent the muscles from cramping. Without proper fluid intake, it can lead to lightheadedness, nausea, vomiting and even death.

This investigation has allowed us to take a closer look to see if there is a relationship between an individual’s hydration level and how well they are able to perform in an Ironman triathlon.

The Study reveals that certain thresholds of hydration levels may be extremely vital as to one’s ability to finish an Ironman race.

By performing a regression analysis, we were able to see that not only is there a relationship between hydration level and finish time, but that with every 1% increase in hydration, the mean time decreased by .2662 hours (16 minutes) for men and .2036 hours (12 minutes) for women. With this information, we are able to take things a step further and predict with 95% confidence, what the finish time will be based on hydration levels.

HYDRATION ON ITS OWN IS NOT A GUARANTEE OF SUCCESS.

Background of the study.
Tanita Corporation, a world leader in precision electronic scales. For over 65 years scales have been the cornerstone of the global, family‐owned company based in Tokyo, Japan. With a focus on health and wellness, Tanita manufactures a wide variety of scales ranging from gram kitchen scales, to pediatric scales for infants, to bariatric scales weighing patients up to 1,000 pounds. Tanita is the scale of choice for the NCAA Wrestling Championships, Jenny Craig, Weight Watchers as well as physicians and hospitals worldwide.

In 1992, Tanita developed the world’s first foot‐to‐foot body composition analyzer. Using Bioelectrical Impedance Analysis (BIA) technology, Tanita’s body composition analyzers send a safe, low electrical signal (50 kHz, 500 Micro Amp) up one leg and down the other, carried by the water and fluids that are contained within the body to measure impedance. Muscle is normally approximately 50‐70% hydrated whereas fat is only 10‐15% hydrated. This impedance information is then used to calculate multiple readings including the amount of lean and fat tissue within the body, bone mass and hydration.
The process has been independently vetted as being highly consistent and repeatable alongside Dual Energy X‐ray Absorptiometry (DEXA), which is widely considered the gold‐standard in body composition. Tanita’s FDA cleared, “foot‐to‐foot” process, provides an easy to use, yet clinically accurate solution, and makes body composition assessments accessible in both the professional and medical environment as well as at home. Since its inception, Tanita has sold over 30 million body composition analyzers worldwide.

In 2004, Tanita identified a demand within the fitness industry and partnered with one of the most recognizable brands in all of fitness ‐ Ironman. Organized by the World Triathlon Corporation (WTC), and with over 30 years of history, Ironman is regarded as the most honored and prestigious triathlon in the world. An Ironman triathlon consists of a 2.4‐mile swim, 112‐mile bike and a 26.2‐mile run. What started as a challenge among friends in Hawaii in 1978 has grown to more than 180 events worldwide each year, covering six continents and with more than 100,000 athletes competing. Ironman has become the international standard of athletic excellence and symbolizes best‐in‐class authenticity, performance and success.

Since the Tanita and Ironman union, triathletes all over the world have utilized Tanita’s body composition analyzers to monitor their weight, body fat percentage, muscle mass as well as to help calculate their sweat loss during workouts. Even before Tanita and Ironman joined forces, Tanita had always addressed the importance of proper hydration to the general public.
Considering the grueling and unforgiving demand and stress put on the body during an Ironman competition, Tanita suspected that a triathlete’s hydration could be vital to their performance, and may even provide an indicator as to how well they will be able to compete in an Ironman triathlon. The question was raised, Is there a direct correlation between pre‐competition hydration and performance in an Ironman triathlon?

Method of Data Collection
During athlete registration at the 2008, 2009 and 2010 Ford Ironman Louisville, Tanita received permission from Ironman to obtain hydration readings of the participants. After the athletes had received their bib number, they were directed to one of six body composition assessment stations where a Tanita trained assessor was located. Six, fully calibrated, Tanita BF‐522W Body Fat/Body Water Analyzers were used during the assessment process. Once at the assessment station, the athletes were asked their bib number, age and height. A reference chart converting centimeters to feet and inches was positioned at each station to accommodate international competitors unfamiliar with their imperial measurement. The assessor input the athletes age, height and gender into the analyzer. After removing their shoes and socks, the athlete stood on the device barefoot to complete the analysis. The assessor then recorded both the athlete’s bib number and hydration level. Over the three years, assessments were taken on 5,740 competitors.
After the event, Ironman provided Tanita a detailed spreadsheet with the competitors’ information including their bib number and completion time. The bib number recorded by the assessor during registration was referenced and matched with the race result data and each hydration level was assigned to its appropriate athlete. The results for men and women were then separated and the athletes who did not finish the race were given a time of 18.0 hours.

The instant a triathlete takes the plunge into the water to begin their 140.6 mile journey; many questions weigh upon their mind. Will my wetsuit tear? What happens if I get a flat tire? Will it rain? Will it be windy? Can I do this? With so many factors out of their hands playing roles into how well they will do, it appears that through this paper, there may be at least one thing they can control that will help determine their day. What is my hydration?

and other links at www.Purifyingh2o.com